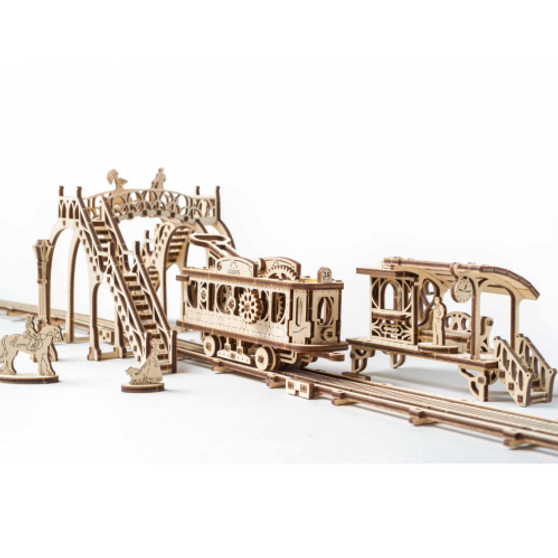 We are introducing a Tram Line Model – the first mechanical model from the new  Mechanical Town Series.  The model which you can build with your own hands, look and feel each part, each movement of transport vehicles, surroundings, play and create your own stories with people who are living in this town. The new model has gaming component and made entirely from wooden materials. It’s great for hobby & collection.  Each part has a unique design and interesting engineering.  UGEARS’ Tram Line model doesn’t need glue or special tools or even toothpicks to connect parts, which makes putting it together even more exciting.
The fully assembled model retains moving parts and elements and remains entertaining and educational for family projects.
Tram Line model consists of 14 parts, which come in a convenient scale for building and playing with.

​The cutting is well done; each of the parts comes out of the plywood sheets easily. No glue and special tools are needed for putting the model together. You can assemble it at home on the table. Fits together like a puzzle without glue or special tools thanks to Ugears’ patented plywood joints.