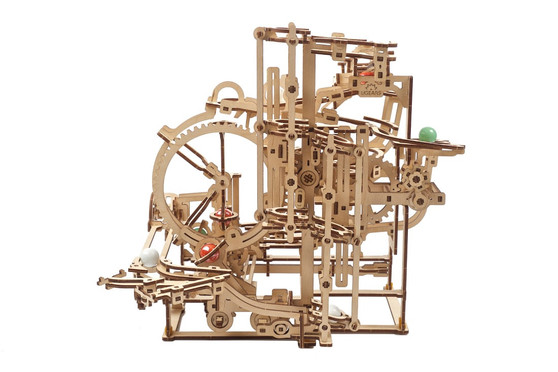 Introducing the Marble Run Stepped Hoist, the second in a series of Ugears modular marble runs. This fun and fascinating wooden marble run features an ingenious 3-stepped alternating lift mechanism and a set of new features to hold your attention as you watch the marbles make their cyclical journey. Multiple tracks and elements are packed into a compact space in this DIY marble run.

The model has a 3-stage alternating lift that hands the marbles back and forth as they climb to the top to embark on their amusement park adventures. Which marble will take which track, and which will make it down first? The Marble Run Stepped Hoist features a 3-marble accumulator in which the third ball opens the gates for the trapped first and second marbles, sending all three along their divergent paths. There are three tracks: the first consists of a 2-marble accumulator and serpentine run, the second is a hammer swing inside a C-shaped cradle, and the third has a whirlpool or funnel. All marbles eventually pass through the collection tray and into the seesaw lift. A rocker switch mechanism either sends the marbles back along the return track to the 3-stepped lift, or (and this is where it gets really exciting!) into another attached Ugears marble run.

We have designed the Ugears line of marble runs to be modular, that is, each model works as a standalone, or it can be connected frontally or laterally to other Ugears marble runs of the same or different design (2 or 4 models can be connected, in pairs, using the special connectors included in the kit). The rocker mechanism at the end of the run can send marbles in one direction or the other, or in both directions (depending on the attached weight), returning marbles to the original hoist or sending them to a different marble run. With adjoining marble runs you now have an amazing, complex system of interconnected elements, all powered by a single crank. It's like a miniature amusement park! Keep an eye on your favourite marble—who knows where it will end up, when it will return to its starting point, or what rides it will take along the way!

The Ugears Marble Run Stepped Hoist is an exciting combination of art and engineering. It is both a beautiful kinetic sculpture and an intricate toy that teaches as it entertains. As you build this ingenious wooden marble run, you will learn about the interplay of drive gears and driven gears and the function of counterweights. Turn the crank handle clockwise to set the machine in motion, and prepare to be mesmerized as the alternating stepped ladder collects, lifts, and passes the marbles back and forth until they reach the top of the machine to start their runs. Ugears marble runs are strong. Rigidity in the structure is achieved through a strong base and tightened frame parts. A muscular gear drive delivers power to both lifts: the main 3-stepped alternating lift and the auxiliary seesaw lift.

Everyone will enjoy watching marbles going up and down tracks, passing through various obstacles, and racing through a course. Marble tracks are fascinating, they grab our attention, and yet they're also relaxing. Marble runs and races have become an unexpected online video phenomenon, with thousands of videos racking up millions of views. You choose a marble to cheer for, you wonder which path it will take, you put yourself in the marble's place, imagining that you are going on a marvellous, unknown journey, with twists and turns and surprises around every corner. The thrill is even greater when you've built the marble track yourself—now you're not just passively watching a video, you're fully invested because you built a wondrous machine with your own hands.

Experience the satisfaction of building your own intriguing, 3D puzzle / kinetic sculpture / marble run from Ugears. Everything you need for this fun DIY project comes right in the box, including pre-cut wooden boards, 10 marbles, plus wax and sandpaper (for optimal gear function).