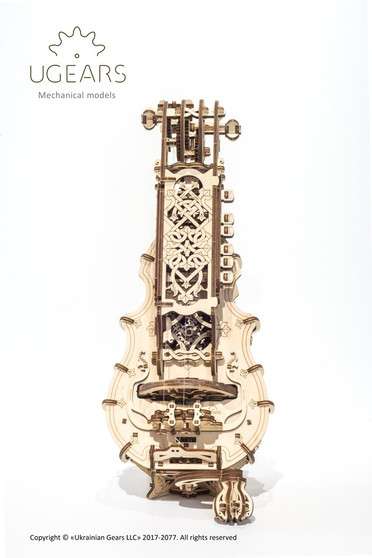 The hurdy-gurdy is a string instrument that produces a sound resembling one of a bagpipe by a hand-turned wheel rubbing against the strings working similarly to a violin and a fiddle bow.

The history of this instrument begins in the 15th century. One of the earliest forms of the hurdy-gurdy was the organistrum (a portable organ) in Medieval Europe. After some modifications it became a common instrument among travelling musicians in England and went through its renaissance period in the later 17th-18th centuries as more of the noble class musical instrument for the amusement of the rich. Those instruments were decorated by craftsmen with inlays and carving and had the built-in hurdy-gurdy mechanism into the guitar or lute body. Some call the Hurdy-Gurdy music “a medieval rock’n’roll”, which we find pretty cool. It captured us and we decided to create the Ugears’ version of the Hurdy-Gurdy.

Inspired by the art of medieval craftsmen, enriched by smart engineering of the XXI century and created by Ugears engineers’ collective imagination. Richly detailed with an eye toward romance and artistry, our version of this indelible symbol of medieval life and adventure impresses all who come across it and get a chance to play it.

The Ugears Hurdy-Gurdy is a fully fledged musical instrument. It’s easy to play: just turn a crank with one hand putting the rhythm into the music and push the keys with the other. A unique combination of good taste, wood and mechanics. An awesome gift and smart hobby idea for your friends and family.

Ugears has created this 3D puzzle with great care and perfection. It is made of attractive, high quality wooden material. All parts are pre-cut into plywood boards and are easily removed for assembly.

Create a beautiful and functioning vase with Pintoo. This 160 piece jigsaw brings your creation to l…